Keep your eyes open for any odd-looking gadgets in your vacation rental. Gadgets that look bulky or out of place in their surroundings may contain a hidden camera.

Airbnb says they are cracking down on hosts who don’t disclose hidden cameras in their property listings. but that’s no guarantee all hosts are complying.

Admittedly, it’s not the easiest thing to spot a gadget containing a hidden camera that looks out of place, because cameras have become so small, they can be hidden in virtually any device—and ones anyone can buy on Amazon, according to a FastCompany article.

Here’s just a small sample of the types of devices you can buy on Amazon with cameras hidden in them: alarm clocks, wall clocks, smoke detectors, plants, mirrors, light bulbs, speakers, and even USB wall plugs.

Still, if you see an alarm clock in a bathroom or some other place you wouldn’t expect one to be, that could be a tip-off that something is amiss. Similarly, if you see any devices, such as a USB wall plug pointed directly at a bed or shower, something could be up.

Unfortunately, the above visual checks of an Airbnb or holiday rental aren’t always enough to spot hidden cameras, even for the keen-eyed person. The good news is there’s an even better way to identify hidden cameras.

Virtually all modern hidden cameras, especially the types like the ones listed above, use wireless technology to connect to the router in the Airbnb so they can stream the footage over the internet where the host can view it remotely. But the very fact that these devices are covertly using a wireless signal to stream footage online makes them vulnerable to detection.

Unfortunately, the above visual checks of an Airbnb aren’t always enough to spot hidden cameras, even for the keen-eyed person. The good news is there’s an even better way to identify hidden cameras.

Virtually all modern hidden cameras, especially the types like the ones listed above, use wireless technology to connect to the router in the Airbnb so they can stream the footage over the internet where the host can view it remotely. But the very fact that these devices are covertly using a wireless signal to stream footage online makes them vulnerable to detection.

Smartphone users can use apps like Fing (available for both iOS and Android) that can display all the wireless devices connected to a Wi-Fi network. So after arriving at your Airbnb and connecting to the host’s wireless network, whip out Fing and give that network a scan. It’ll show your device and any other connected to that same network.

We’ve compiled a list of quick tips Airbnb guests can use to find hidden camera in an Airbnb. 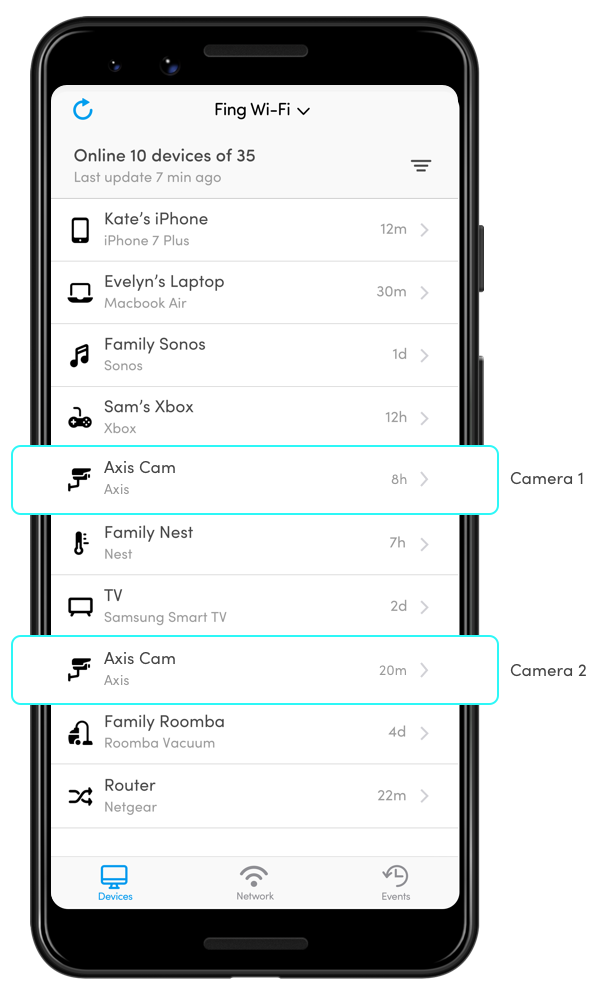 Download the Fing app on the App Store or Google Play. Connect to the WiFi and give the network a scan. All the devices on the network will be revealed with Fing App including details about the device such as MAC address, vendor and model.

After using the Fing app to discover devices on the network, you can use the device list view to search for any IP camera vendor names. (Mobotix, Vivotek). Here’s a list of some of the most common IP camera vendors from 2019 to look out for on the Fing App device list.

3) Look up devices by MAC address to identify a camera

If you know a device’s MAC address which you can usually find on the bottom or back of it, you can look up the devices by MAC address. This will identify what the device is.

Take a look around the room objects that may be positioned oddly. For example a charger or adapter right on the bedside table facing the bed or a smoke alarm in the corner of the room rather than on the ceiling. If you find something odd, inspect the device and see if there is a brand name on the item, search it up online. If you are unsure, you can cover the device as an extra precaution.

Turn off the lights and use a flashlight to scan the room for lenses. Lenses reflect light so you may see something that has a reflection indicating it could possibly be a hidden camera.

We recommend trying out these five tips the next time you check-in to an Airbnb or holiday rental as an extra precaution.

Airbnb’s policy states that hidden cameras or cameras of any kind inside a rental are to be disclosed before a guest books the property, otherwise the guest is free to cancel any time.

“If you’re a host and you have any type of surveillance device in or around a listing, even if it’s not turned on or hooked up, we require that you indicate its presence in your House Rules. We also require you to disclose if an active recording is taking place.” (Airbnb)

Airbnb guests need to equip themselves with the right tools when checking into accommodation.

Using Fing is a really great option to scan the network for hidden IP cameras when checking into an Airbnb. If you identify that the network has a second WiFi network this could mean that IP camera is linked to a separate network in which case a manual investigation should take place.

In that case, your only solution is to use a dedicated piece of hardware known as an RF detector. All wireless devices give off a radio frequency (RF)—it’s what allows Wi-Fi and Bluetooth to exist. An RF detector can hone in on devices emitting these RF signals, showing you where they are located in an Airbnb.

RF detectors are small handheld devices that can also be purchased on Amazon. They’ll usually set you back about $30 to $50 depending on the model you buy. But they’re worth the cash if you’re worried about shady Airbnb hosts watching you traipse around their property half undressed after taking a shower.

The first thing you should do if you find an undisclosed hidden camera in your Airbnb is contact both the host and Airbnb directly and report the camera. It’s up to you if you also want to file a police report. Hidden camera laws vary by state and country.

As with hidden cameras, if you find a smart speaker and that bugs you, it’s best to unplug it. Just if you do unplug any smart connected devices (speakers, cameras, hidden or otherwise) in the Airbnb, be sure to let the host know so they don’t think you’re the one trying to do something amiss.